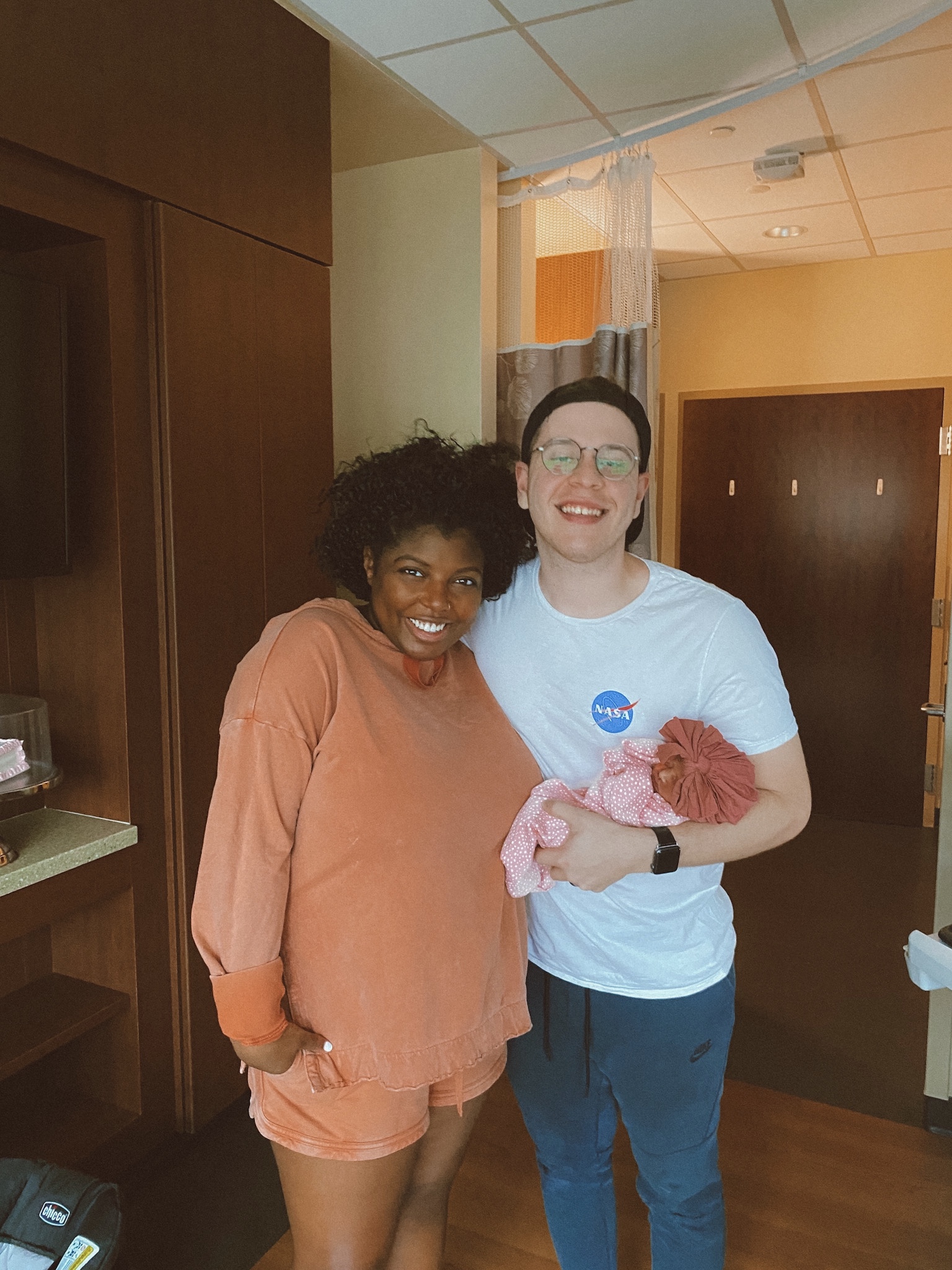 I prepared for Nora’s birth in a lot of ways — we decked out the nursery, stocked up on diapers and wipes, and made sure we took labor and delivery classes. But when it came time to go home from the hospital, I realized my wardrobe wasn’t exactly sufficient for postpartum recovery. I had nursing tanks and maternity clothes, but I didn’t have much else. I wanted to write a post about what to wear after giving birth for any moms who may be wondering what worked for me.

It didn’t really occur to me that I could possibly need a C-section as I prepared for our hospital stay. When I was packing my hospital bag, I threw in a few loungewear sets to wear home but didn’t really think about what I’d need to wear. Unless you’ve had a C-section, it’s hard to explain just how painful recovery is. Any underwear or clothing that touches your scar is unwearable for several weeks after giving birth. I knew none of this, so scrambling to buy clothing wasn’t fun in those first days. If you want to be more prepared than I was, keep reading for my suggestions.

What To Wear After Giving Birth 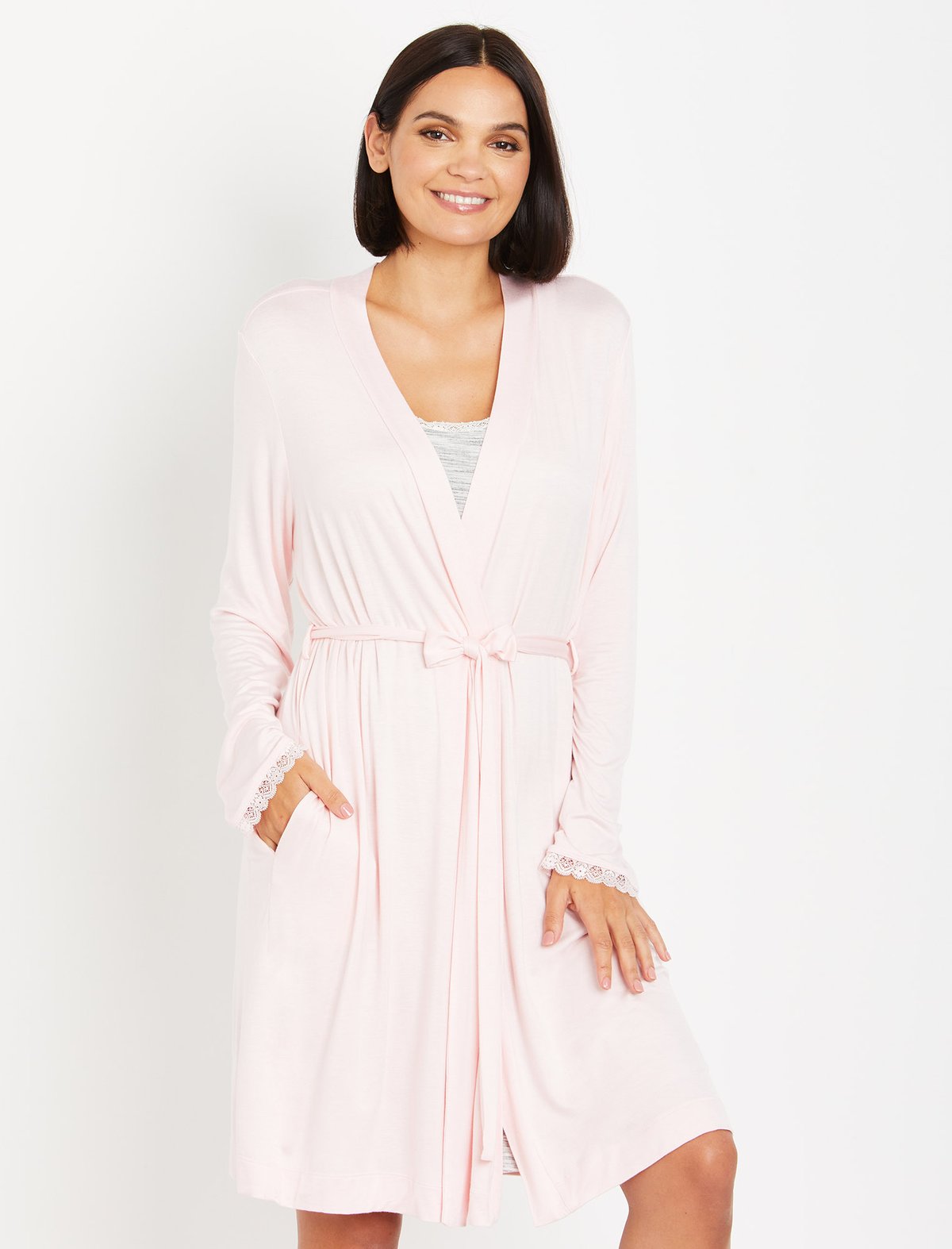 When I think about robes, I think about getting right out of the shower, but that’s not all they’re good for. I contemplated buying a delivery gown so I didn’t have to wear the generic hospital one, but I’m glad I didn’t — not going to get into the gory details, but giving birth in the hospital is messy! I was gifted a robe and swaddle set from my registry instead of a delivery gown, and after I took cute matching pictures with Nora when she was born, I stayed in the robe. Keeping robes on hand allows for you to remain comfortable while also allowing easy access if you’re nursing. Motherhood Maternity, $29.98.

If you follow me on Instagram, you know that I didn’t breastfeed for more than a couple of weeks for health reasons. But during the time that I did breastfeed, wearing nursing tops was super helpful when feeding Nora. I wasn’t going into public much, but I had my family and my doula coming over and didn’t always feel like being half-naked, so it made a good home outfit. 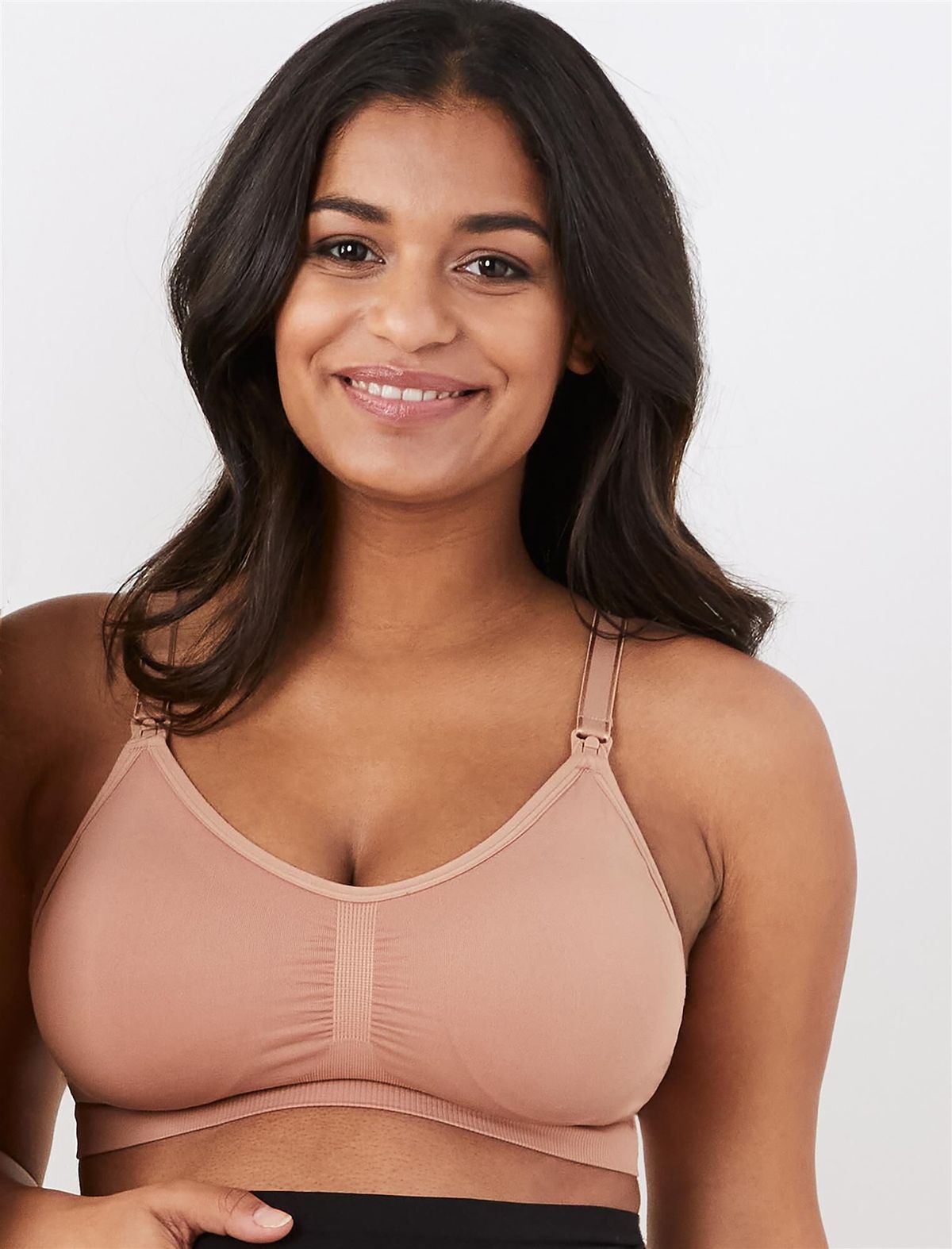 My biggest piece of advice? Buy nursing bras while you’re still pregnant. Thanks to hormonal changes, pregnancy is basically your period on steroids when it comes to your boobs. It’s painful, and your bra size will likely change. You deserve to be comfortable, so don’t force yourself into normal bras if you aren’t up for it. Instead, get a nursing bra early on, and keep it on hand after you deliver. Motherhood Maternity, $24.98.

As I said before, I didn’t nurse for very long, but I did mentally prepare for how I’d dress while breastfeeding. There’s no need to worry about being modest after giving birth — you did birth an entire human, after all! — but if that’s a concern of yours, wearing a button-down shirt or cardigan allows for easy access, especially if you’re wearing a nursing bra underneath. 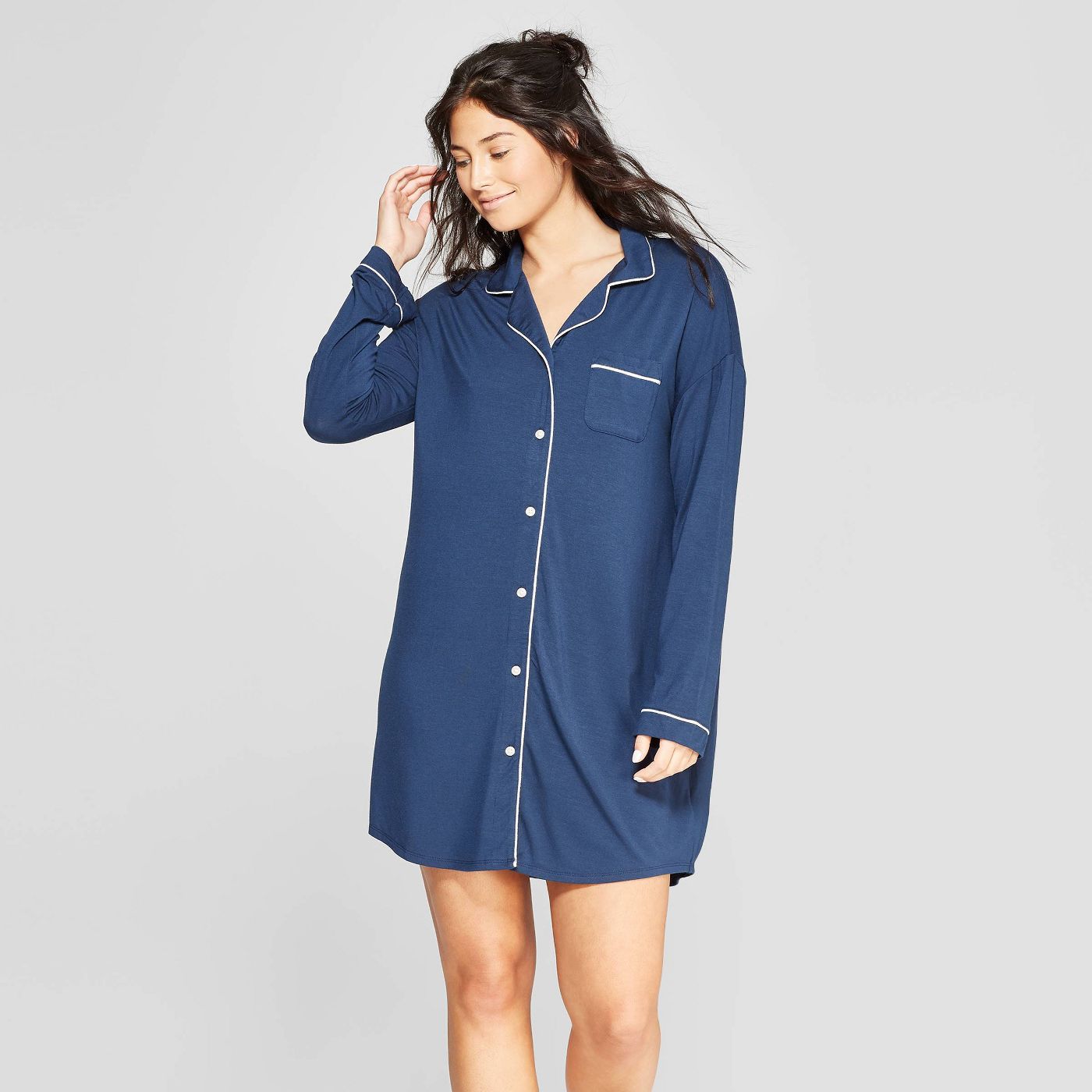 I don’t traditionally stay in my pajamas all day, but there’s nothing traditional about the postpartum period! Everyone says that you’re tired after birth, and I thought I understood. But to be an annoying cliche, you don’t know “postpartum tired” until you’ve lived it. Because of the C-section, I was taking Percocet around the clock, so it was just an exhausting experience all along. Wearing pajamas made it so much easier to feel comfortable. Target, $19.99.

Adding the important caveat that you shouldn’t ever have to wear a nursing cover unless you want to, and anyone who makes a fuss about you pulling out a boob while feeding your child can kindly see themselves out. That said, if you aren’t comfortable nursing in public, a nursing cover can help a lot. It’s important to remember that some babies won’t enjoy having their faces covered (which I can’t blame them for), but I still bought a nursing cover and didn’t regret the choice.

High-waisted shorts were a savior after giving birth. Normal pants irritated by C-section scar, and even leggings were painful to wear. These shorts from American Eagle were perfect for the occasion, and I recommend stocking up on them & similar items even if you aren’t expecting to have a C-section. Your stomach doesn’t go back to its normal size for several weeks, so having loose clothing was awesome. Aerie, $34.95.

I panicked the first time I had to leave the house, which was about three days after Nora was born. It was time to go to the pediatrician, and I wanted to look presentable and feel comfortable. Thankfully, I had a few flowy Target dresses I bought during pregnancy that ended up being a great option for postpartum wear. I ended up buying new clothing about eight weeks after giving birth because I was tired of nothing fitting me correctly. If you buy loose clothing to wear right after birth, you’ll probably be able to wear them for a while after. 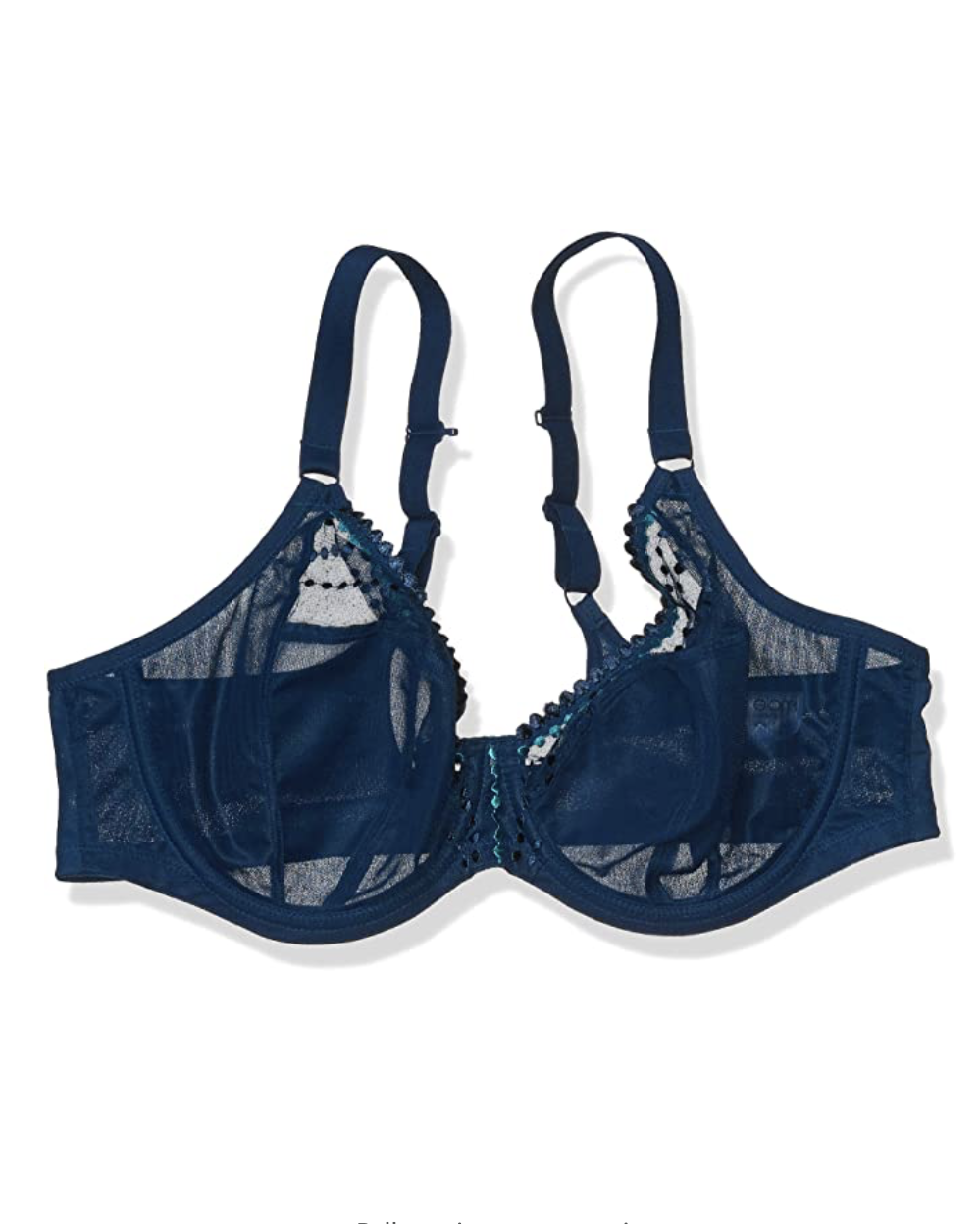 I sincerely hope that all moms who hope to breastfeed can without a problem. But for me and so many others, breastfeeding just didn’t work out. Whether it’s due to a latch issue, fluctuations in supply, a health concern, mental health reasons, or simply because you get tired of doing it — you don’t need a reason to switch to formula.

If you decide to use formula instead of breastmilk, you might have to go through the process of drying up your milk, which was emotionally brutal for me. I managed to speed up the process by wearing a form-fitting bra, pumping when I needed to, and not putting her on the boob. My milk dried up within days and wearing a bra that applied pressure was a huge reason it happened quickly. Amazon, $69.

I assumed that maternity clothing is something I’d only wear while pregnant, but surprise! I’m still wearing my maternity leggings nearly seven months later, and I have no plans to stop. When you’re looking for postpartum clothes, your own closet is a great place to start. There’s this idea that you have to “bounce back” after giving birth, which is so problematic. If you have comfortable maternity clothing, you can (and should!) keep wearing it for as long as possible.

As always, I hope this post was helpful! Let me know if there’s anything I missed in the comments. 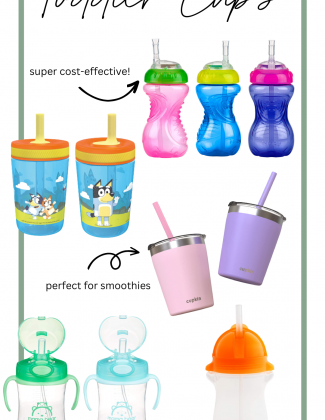 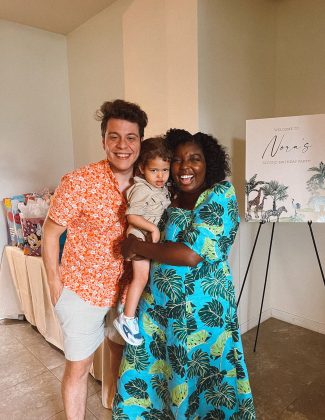