I’m an anxious traveler even when I travel by myself, so flying with a toddler isn’t something that excites me. I flew with Nora right after she turned 1, and she was still little enough that she slept through most of the flight. These days, she’s constantly on the move, so I didn’t know how she’d fare on a plane. We made it back in one piece, although there were some meltdowns! I wanted to share what worked and didn’t to help you plan your next toddler trip.

Flying With A Two-Year-Old

Before I get into my experience, I think it’s so important to remember that it’s okay if traveling with a toddler is hard. I used to cringe at “big feelings,” but it is the best way to describe what toddlerhood has been like for us. Routine changes can be complex, even for adults.

Nora still takes one nap a day, usually between 11 a.m. and 12:30 p.m. I’ve found that morning flights work best for her. Ideally, we’ll land at our destination right around nap time. Some people try to schedule flights so their kids will sleep on the plane, but that’s never a guarantee. Nora can sleep in the car on a road trip, but we’ve never had her take a long nap on a plane. Instead, she ends up cranky and overtired. The worst choice we’ve ever made was flying out at 4 p.m. and hoping she’d nap beforehand — she didn’t, and she was miserable the entire time. I also think it’s important to allot time for deplaning, getting your bags, and catching an Uber or picking up a rental car — it can take a long time. A later flight could mean a way late bedtime. 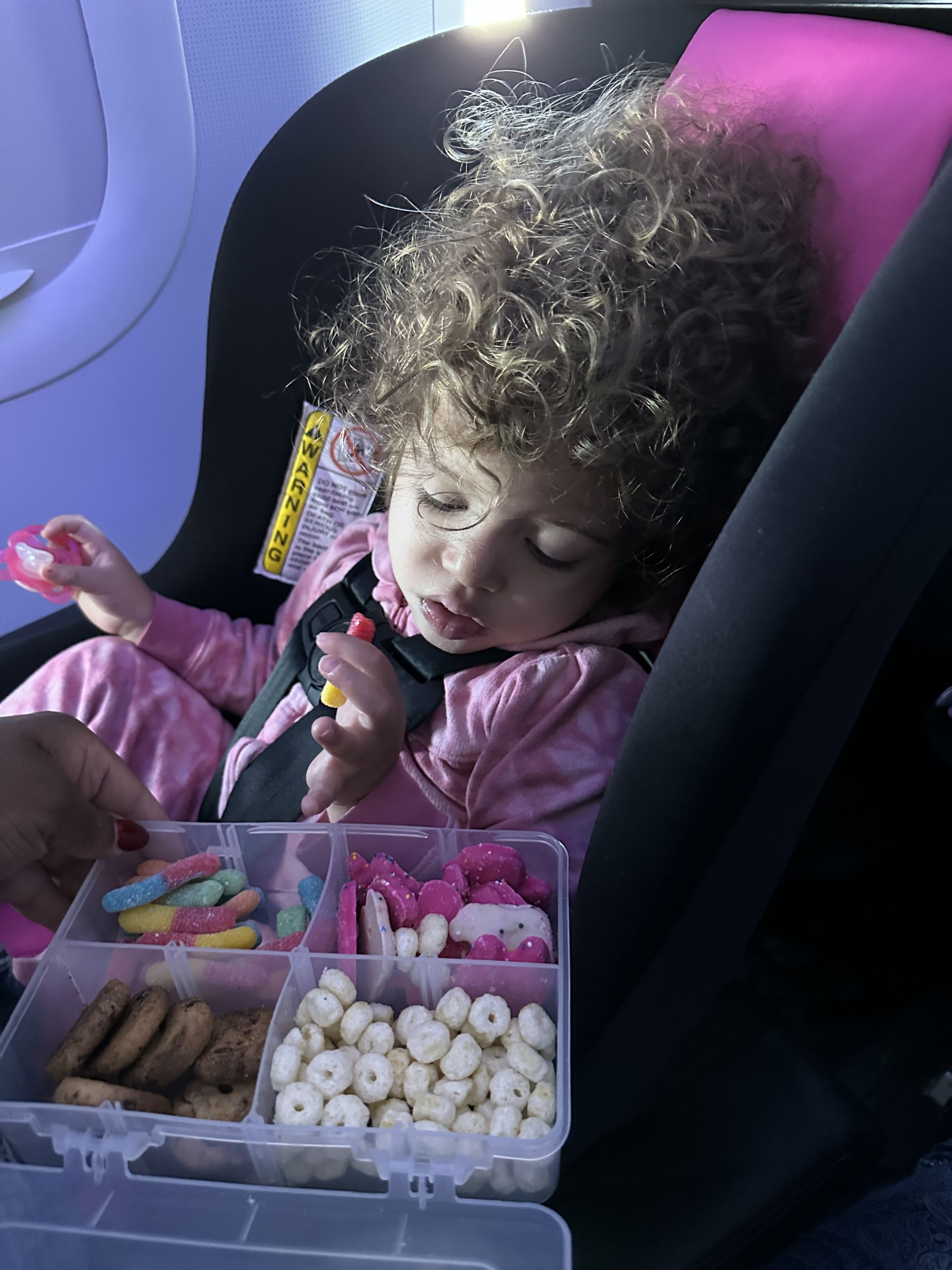 The top tip I got for flying with a two-year-old? Bring snacks. I bought a cheap plastic box on Amazon and filled it with Nora’s favorite food — gummy worms, cookies, Puffs, animal crackers, and more. Having a variety to pick from kept her busy, and it was a lifesaver because she didn’t always want the food we bought her at the airport. (I know some parents only feed their kids healthy snacks, but I’m not one of them. Judge away.)

The biggest culprit that makes flying with a 2-year-old hard, other than fatigue? Boredom. I bought a bunch of toys to take with us on our flight, and she loved Crazy Aaron’s Thinking Putty. It’s available in a ton of different colors, they have scented versions, and it doesn’t make a mess. Honestly, I didn’t bring as many toys as some recommended, and I don’t regret it — we had so much stuff to carry, so a heavy bag wasn’t appealing. Another winner was this mess-free coloring pad.

For screen time, I started a free YouTube Premium trial and downloaded several episodes of Ms. Rachel and Sesame Street, along with a few of her favorite movies on Disney+. We practiced using headphones at home, and she did great, but once we were on the plane, she refused them and watched the iPad on mute. Hey, whatever it takes. 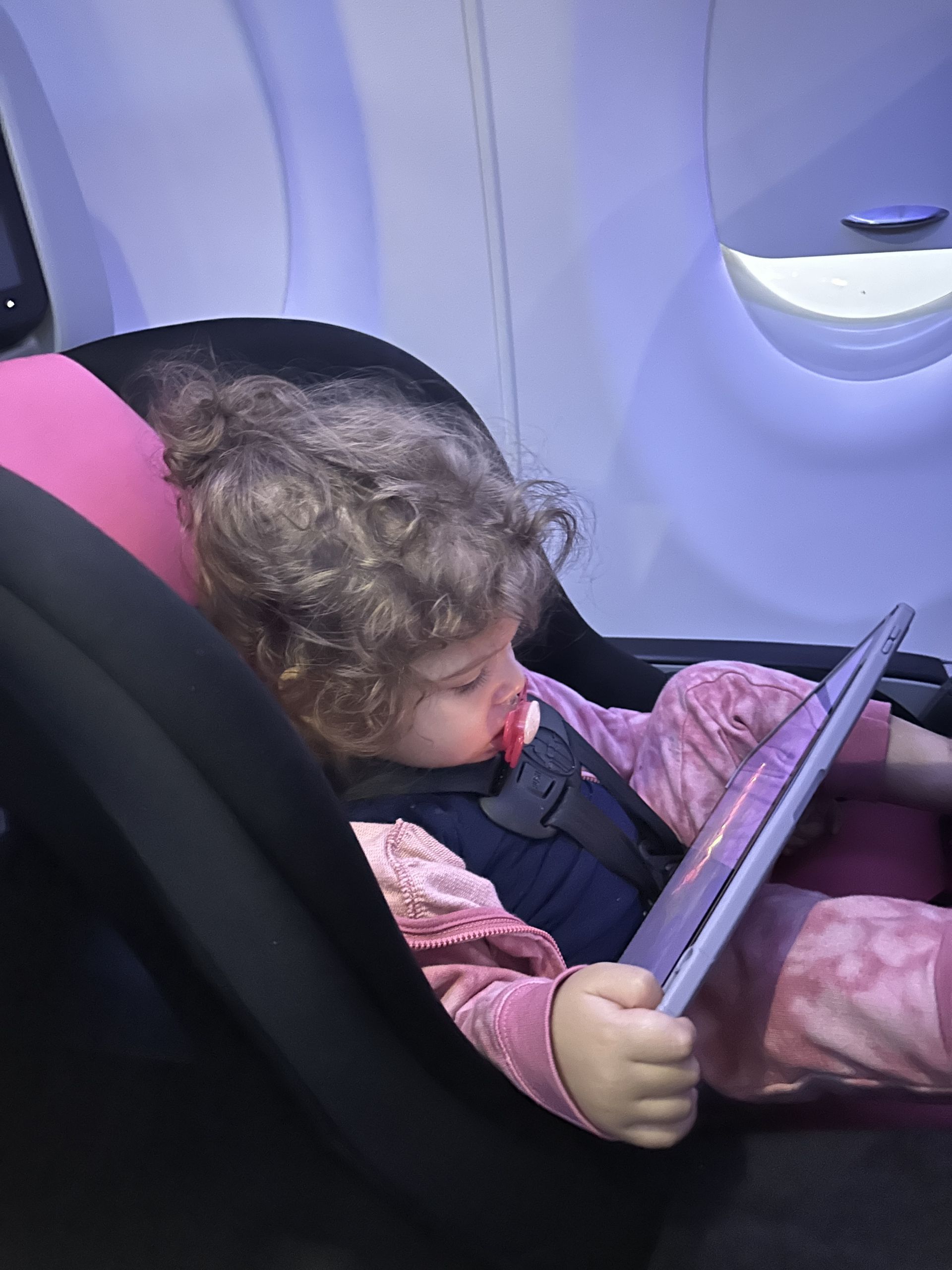 The FAA recommends that all children sit in their own seats while on a flight. It’s safer, but I understand that it’s not always feasible. Nora was a lap baby the first time we flew with her (the TL;DR is that we waited too long to buy her a seat and couldn’t). We had to buy her a seat on our most recent flight because she’s over two years old. I decided to bring our travel car seat, and I’m glad I did. Like most toddlers, Nora’s not great at sitting still, and the seat kept her in place. She did want to get out of it for the last leg of our flight, but overall I don’t regret it. If you do bring a car seat, a travel bag makes it much easier to carry.

Closing Thoughts On Flying With A Two-Year-Old

I’m a people-pleaser and hate making a scene, so flying with a two-year-old stretches me! Yes, people might stare if your child is upset — but I think it’s important to remember that they aren’t old enough to regulate their emotions in any other way. During a stretch when I couldn’t get Nora to calm down, I reminded myself that everyone on the plane had a child or was a child once. Noise-canceling headphones exist, and I don’t have to feel guilty that my baby is acting like a baby. Honestly, people were mostly sympathetic toward us, anyway. The woman sitting in front of us on one of our flights turned back and gave me the kindest smile as Nora screamed — I almost cried. Most importantly, it’ll be worth it once you get to your destination! 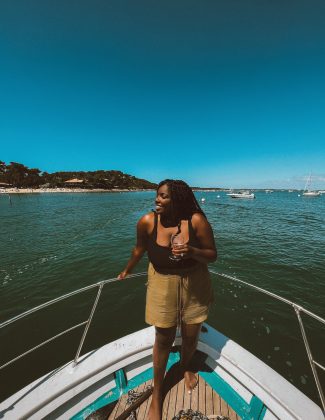 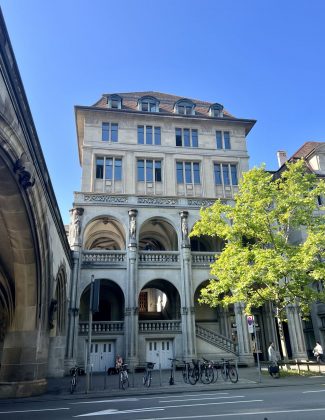